Today is all about planning – for tomorrow, for the next few months and even the next few years. It’s not like the plans are set in stone. It’s more of a precaution to be prepared on what’s coming ahead; in other words, “seeing” the future. It’s an exhausting but exhilarating task. It gives you the energy that will last a lifetime.

The best way to see where you want to go is to lay down all of your options. It’s not going to be easy, but  you know that it’s going to be fun. It’s all about the journey.

Through a mirror or not? In layers or not?

Despite the lack of sleep today, I had to sit down to do some real work. Quite surprisingly, it didn’t require too much effort to focus myself. It probably comes naturally when you’re passionate about what you’re working on. Because I had to approach this particular thing from different angles, I had to distance myself from it. Sometimes, distance is necessary, even if it’s hard, to grow and to approach something with a new perspective. The reward when you figured it out? A fulfilled and energized feeling enough to last me the rest of the long day. 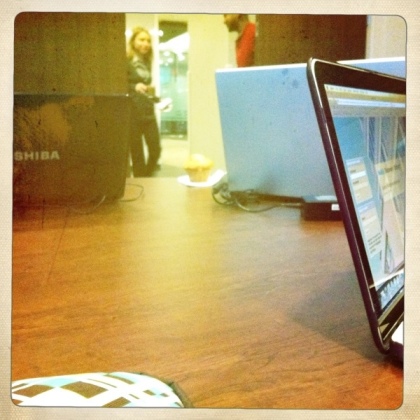 As some of you already know, I got accepted at the Entrepreneur’s Toolkit Workshops. The first session was scheduled today. There were about 30 applicants who got chosen. As expected, each one brought in their unique ideas. The session was very beneficial in a way that you get different perspectives about your idea or startup from other entrepreneurs and the incredible facilitator. Looking forward to the next two! (Gotta do my assignment :P).

Here’s my favourite interview at the moment.

If you do not get it and act on it, I don’t know what’s wrong with you.

When I watched The Social Network last year, I was struck by a particular exchange of dialogues between Justin Timberlake (a.k.a Sean Parker, Founder of Napster) and the Stanford girl he just slept with:

Girl: So what do you do?

Sean: I wouldn’t say that (coolly).

Girl: What would you say?

Sean: That I’m an entrepreneur.

Sadly, this view is somehow true. When people hear of someone being an entrepreneur, most often two extreme illusions come to mind: THE UNEMPLOYED and THE “ROCK STAR” RICH. While the vision of owning a business brings stars to people’s eyes (not excepting myself), the back of their mind is full to the brim of skepticism. It sounds great, but… There’s always the “but”. The scene mentioned above certainly reminded me of the gravity of the decisions I would have to make and the profoundness of each step I would have to take when I finally trudge that uncertain path.

At the time, I was only thinking of what business to get into. I had a few ideas in mind. But that was it, ideas and guesses. It was like that for many years now. Recently, I thought that if I did not get a move on I would be wasting more time. A little prod from the book I was reading (a review coming), I realized that I should really be getting started. Otherwise, I wouldn’t find out. But where to start and what idea?

Earlier this year, as I was reading business success stories for inspiration, the idea presented itself to me. I love the internet so much I realized that it’s where I should get into. I couldn’t believe I overlooked that. After preliminary preparations and planning… FundBubble was born.

Yes, I have finally started walking that path. Crazy, right? With no big connections from the startup world, not much money, and not much technical expertise. [I admit it. I am not a tech girl. But I love technology. Reading technical blogs became second nature to me (I will share some of my own personal favourites soon)].

Girl: Well, then what was your latest ‘preneur?

Girl: What do you mean?

Sean: Nice to meet you.

And that girl’s reaction in the end is all startup owner’s dream. But I am far from it. I know it will be a long and rocky road.  This path is new to me. A new world that has opened to me which decided to brave. But it feels right: entrepreneurship, startup, internet and the arts. Who knows where this would lead. All I know is I’m very determined and passionate about this.