It is really spring. For the last few days, the weather had been really nice. I don’t mind the thunderstorms (at least at this point) and rain. It’s just great to really spend some time out. Another photo that I love which I took last year is this:

Today I have had the easiest exam I have ever taken in my entire life – relative, of course, to my level (uhm, elementary? haha). It’s safe to say, I took the exam without even reviewing (hello, party people last Friday night!). I am not saying this to brag. I bet even you too will be able to answer questions like: “What is the equivalent of 25% in decimal?” I know, even without any options given, you know that the answer is 0.25 (really?). What I noticed the entire time I was writing the exam is how, as an adult, I take things a lot seriously now and I pressure myself more than before. Of course, there’s ego involved as well: if I failed this, it would be the end of the world me! I’d be too ashamed to look at myself or be myself (my Leo side speaking).

But time constraints meant real life-changing events and opportunities in the near future rather than just passing the exam and get a handy-dandy-diploma. I guess I’ve really grown up. 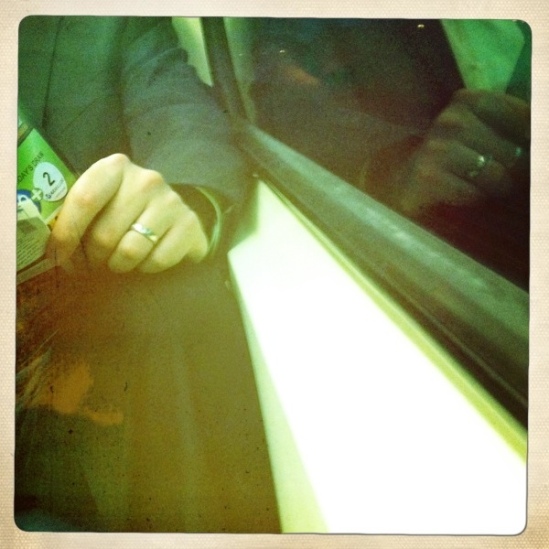 Some simple pleasures that we often disregard:

Our train leaving on time.

Arriving in a comfortable home.

Eating a healthy meal for dinner.

…and more. These are just what I realized tonight on the way home. Any simple thing that had happened to you lately and really appreciated it?

I had always wanted to take some winter photos. Winter meaning snow. It did not happen last year since 2010 was officially proclaimed one of the warmest winters in Canada due to less amount of snow. Though I hate being out there and cold, I welcomed the white stuff with genuine appreciation as it fell beautifully from the sky when the first snow storm of the year (and decade) hit GTA last weekend. I even admired the snow-covered street and cars in the middle of the night.

The next morning, I woke up early feeling energized. I took my camera out and stole some shots from my bedroom window before I dressed up. But by the time I finished, the storm had stopped. Still, that was the best time to go out and play with the freshly fallen snow. I even volunteered to shovel our balcony :P.

Here are some of the photos I took literally a few minutes after the storm.

Snow photography isn’t really as hard if you have mastered control of your camera. Some point-and-shoot cameras nowadays even have a built-in setting for this type of shots. There are only two things you have to watch out for: exposure and white balance. Some cameras automatically adjust the exposure compensation. The adjustment makes the snow look gray. If this happens, you can always correct the exposure through your editing software. You also have to make sure the white balance is set correctly. I have mine in auto. For some shots, it didn’t have any effect at all. However, I noticed that a few came out with a bluish tinge. To correct this, you can either use photo filter or adjust the photo temperature. I prefer the latter.

We have a long way to go till winter is over. So for everyone wishing to take their cameras out, you still have a lot of chance. Don’t let it pass. 🙂